Student Employee of the Year

PULLMAN, Wash.—Construction management major Noah Sanchez was barely adjusting to being named Washington State University Student Employee of the Year when another honor came his way—selection for the same title but at the statewide level.

“I was at a loss for words when I learned of the WSU award, which was an exciting acknowledgement of my efforts, to say the least,” said the 20-year-old Wenatchee native who works as a communications assistant in the Office of Academic Engagement (OAE). It is part of the Division of Academic Engagement and Student Achievement (DAESA) in the provost’s office.

“This is nothing short of humbling and gratifying for the work that I’ve done and will continue to do,” he wrote to Alena Hume, student employment coordinator in DAESA’s Academic Success and Career Center (ASCC). She manages WSU-wide student employment services.

Sanchez said, “Then, when Alena notified me that I was chosen as the Washington Student Employee of the Year, I was shocked and overcome with gratitude. I called my mom to tell her and she teared up–I think she used her month’s stash of tissues all at once.” Mom is Esther Sanchez, receptionist at Central Washington Hospital in Wenatchee.

“Noah is a tremendous employee who has not only embraced his role but has also elevated the expectations for any other student employee. He is a fantastic individual and worthy of receiving the award.” 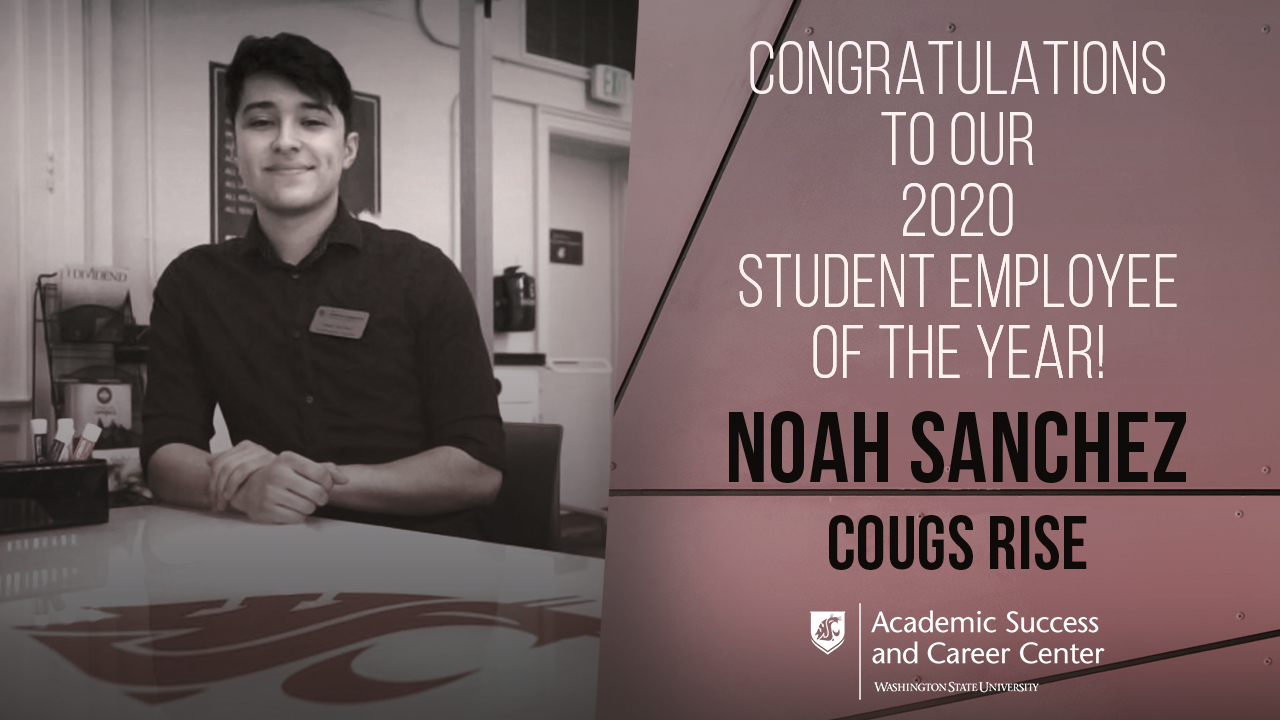 Hume started her job leading student employment at ASCC in October. In addition to day-to-day tasks, she is charged with hosting a job fair in August and running the student employee of the year competition. When she opened nominations for that in December, she wasn’t sure what to expect.

“From my job, I knew there are many undergraduates with jobs on campus. When nominations for student employee of the year closed in mid-February, we had 14 solid candidates for the review committee to consider. They came from employers in diverse units across the campus system, including one from WSU Tri-Cities.

“It was a great introduction to WSU for me because, looking at the nominations, I realized that WSU has great student employees. The pool was made up standouts, really. They all demonstrated strong communication skills, dependability, and flexibility, and they were credited with always being willing to go above and beyond. Many have been in their jobs for long periods of time and bring that something extra to the office.”

For the year’s top award, the committee chose Sanchez.

Hume said, “Noah was the top choice from a very strong pool of students nominated for the award this year. They were all outstanding. Noah’s accomplishments and qualities really stood out.”

“I was happy to send his materials on to the Western Association of Student Employment Administrators, which covers several states, and its executive board selected Sanchez for the top Washington student employee.” The board said it based its ranking on six factors: reliability, quality of work, initiative, professionalism, community and campus service, and uniqueness of contribution.

“I wasn’t surprised at all when Noah took the state title. I am so pleased for him, Acuña-Luna and OAE, and for WSU,” Hume said.

Making of a top employee

Acuña-Luna has led the grant-funded Cougs Rise program in OAE since it began in fall 2017. Cougs Rise staff works with low-income and first-generation students from five state high schools, providing support to finish high school strong and transition successfully to higher education. It helps about 180 participants each year acclimate to a college environment and develop their own networks of faculty, staff, and peers.

Sanchez, from Wenatchee High, was in the first Cougs Rise cohort. Acuña-Luna taught a class and remembers Sanchez among the students, and that his journaling assignments mentioned that he was looking for a job. That, plus a good reference from a teacher in another class, prompted Acuña-Luna to extend a job offer, which Sanchez accepted.

“We had thought about launching some social media to build the Cougs Rise brand from the ground up, and I thought of Noah because I knew him personally. I thought we could also help him cultivate his strengths, interests, and passions. I also knew he was driven and hardworking.”

Sanchez said he has given thought to what kind of an employee he wanted to be ever since his first job at the age of 16 cooking at a chicken drive-in, followed by other stints sorting and packing fruit and working at fast-food and sit-down restaurants. At WSU, he also works as a resident advisor for Housing and Residence Life. Being a student member of Cougs Rise himself has given him unique insights into the program; when he took the communications job there, he was determined to make a difference for the program and for students.

His many accomplishments include posting to social media platforms, delivering public presentations, taking high-quality photographs, being a role model and team leader, and launching the popular CougCast podcast series. It requires him to meet with guests, develop scripts, and make recordings. To do that well, he took it upon himself to learn new software programs, graphic design, and video and sound editing.

“He treats his role not just as a job, but as an opportunity to gain professional job experience and a unique way to lend his skills and expertise,” Acuña-Luna said.

Working for Cougs Rise really isn’t like working at all, he said, “it’s like being with family and helping them. The key is to always be adaptable, have a positive attitude, challenge myself, be introspective, recognize opportunities, and try new things.

“No matter what I’m doing, I always feel I could do more.

“I also recognize that at WSU, I’m changing as a person, professionally and academically. My transitions wouldn’t be the same without the friends and mentors I have here. And, my job at Cougs Rise is a huge part of who I am now and who I will become.”

I Want to Give