On Tuesday, October 2, Beasley Coliseum will be full of employers looking to recruit Washington State University students.  The coliseum will be filled with a range of employers from companies like Alaska Airlines, Boeing, Expeditor’s, J.R. Simplot and PSA Healthcare, just to name a few! Employers will be recruiting for internships and full time positions post-graduation.  The 200+ employers at the Expo are excited to recruit WSU students and return to their offices to share the amazing talent and career readiness skills our students portray.

The Academic Success and Career Center (ASCC), in conjunction with the Voiland College of Engineering and Architecture, sponsor the Career Expo to provide an easy location for students of all majors to meet with a wide range of employers. The Career Expo is the perfect opportunity to land an internship or job before ever leaving campus!

Once students meet with employers at the Expo, they will see that the Career Expo offers more than an opportunity to network and search for a job, it will become the starting point to launch their career.

We encourage all students to come by the Academic Success and Career Center before attending the Career Expo! Our Career Coaching team can help build and refine resumes, identify companies students want to connect with, and offer career strategies that will help students prepare for the Expo.

Check out the registered employers on Handshake:

Jackie Baltazar’s presence in the Department of Criminal Justice and Criminology provides a friendly atmosphere to visiting students and staff who know they can rely on her as a trusted employee who strives to help everyone who comes through her door.

“I really like this job,” Baltazar said. “It doesn’t feel like a job because I want to be here.”’

Baltazar has been the face of the department for the past two years as a clerical assistant. She has earned the department’s respect through her hard-work, endearing attitude and warm smile. Because of this, Jackie has been elected Washington State University’s student employee of the year for 2018.

“When I mentioned I wanted to nominate Jackie,” said Dana Torgeson, Administrative Manager and Baltazar’s supervisor, “several (faculty and staff) offered to write her a letter in support. She is so well liked that everyone wants to see that she is rewarded for her dedication and hard work.”

“It’s really nice to know that my work is valued and to be recognized for all the things I have done,” said Baltazar, from Los Angeles.

Baltazar’s duties started off with basic administrative tasks, but the staff soon realized Jackie was capable of handling much more.

“I feel like I’ve learned a lot,” Baltazar said, who took over managing the department’s website. “I’m not very tech-savvy but I just kind of did trial and error.”

She now manages the website, data entry, editing and much more proving herself to be an indispensable employee.

“She has definitely set the standard for all future undergraduate students to live up to,” said Faith Lutz, Ph. D., Professor and graduate director, Department of Criminal Justice and Criminology.

On top of her work-load, Baltazar also interns with the Department of Social and Health Services, Children’s Administration in Colfax. Baltazar graduates in May and will pursue her masters at Eastern Washington University in social work.

“She has a welcoming attitude and a willingness to help others, regardless of the amount of time or work she has,” said Craig Hemmens, J.D., Ph.D. Chair and professor, Department of Criminal Justice and Criminology.

Her humble attitude and attention to detail are noticed by everyone in the department who appreciate her personal approach to every task she handles.

“Jackie is a huge asset to the department,” said Tina Krauss, academic coordinator for Undergraduate programs at the Department of Criminal Justice and Criminology. “She will be greatly missed when she graduates.”

Hailey Modin, an entrepreneurship senior from Sumner, Wash., has served Washington State University for more than three years as a peer mentor with the Center for Civic Engagement. Her exemplary efforts to benefit students and staff, and her support of the Pullman and nearby communities, has earned her the distinction of being selected as WSU Student Employee of the Year for 2018-19.

“Hailey is beyond her years when it comes to reliability, quality of work, and professionalism,” said Ben Calabretta, CCE associate director. “She exhibits these attributes while maintaining a positive attitude, a friendly demeanor, and a sense of humor.”

Modin’s role at CCE drastically changed when the office became short-staffed and she found herself filling the role of project leader. This required extra time and additional training as Modin was responsible for transporting students off campus and out into the community for various CCE activities.

“I really did not anticipate doing anything outside of front desk work,” Modin said. “I learned that if I asked for more opportunities and extra time, they were willing to let me try new things and learn different positions.”

Thanks to Modin, the CCE was able to make weekly trips to take WSU students to help at the Colfax Food Pantry about 15 miles northwest of Pullman. She also helped transport them to the local Sunnyside Elementary School where they worked one-to-one with second-grade participants in a writing program called Pen Friends. Her efforts further strengthened the ties WSU students have with the region and its residents.

In her new expanded role, Modin also made presentations to student groups to explain the benefits of community service.

“She delivers information in a way that is very understandable and shows her confidence as a presenter,” said Jessica Perone, CCE faculty consultant. The two worked together connecting service learning courses with the CCE and supporting student’s community engagement. Perone joined the CCE team after Modin.

“I relied on Hailey to teach and explain my position,” Perone said. “She was so well versed in the logistics of making the program successful.”

Her contributions made trainings at the CCE rich and well received among her coworkers.

“Hailey really has brought the student perspective to the CCE, especially in ways that support our student staff members’ professional development,” Calabretta said. 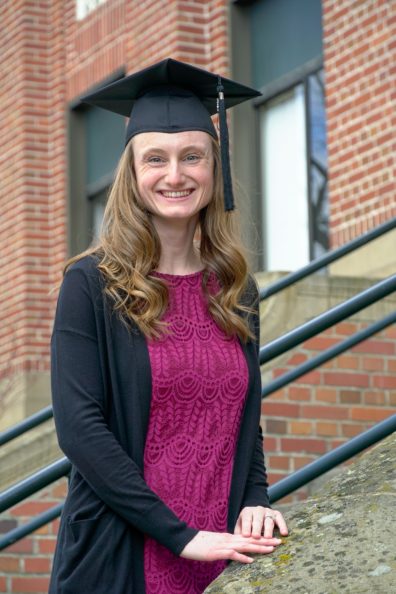 Modin has excelled at connecting the staff and student populations, and attributes it to the nurturing environment at the CCE where she herself was able to grow professionally.

“I had a lot of direct mentoring in terms of professional development,” said Hailey, who received feedback on everything from her presentations to how to communicate professionally to different audiences.

“It was a lot of super-important little things that turned out to be big things in the professional world,” Modin said.

CCE Director Melanie Brown said that Modin took on new projects with intention and enthusiasm and her competency allowed her to further her professional reach.

“I think there are a lot of different ways to keep asking for more responsibilities and I think the college environment lends itself to that growth,” Modin said. “The depth of my experience was not anticipated but I’m very thankful for it. It was totally beyond my expectations but I love learning new things anyway.”

Teach for America and back to school

Modin graduates this May before moving to Charlotte, North Carolina, where she will teach middle school math as part of Teach for America. She will also pursue her master’s degree in mid-grade mathematics at the University of North Carolina, Charlotte. All while helping her husband, Daniel, start his business, Modin Brother’s Composites.

“I have the utmost confidence that Hailey will excel in the Teach for America program and that her considerable qualities and skills will continue to grow,” Brown said. “Hailey is a woman of many talents and competencies that are only just developing.”

Hailey will leave the CCE a better place than she found it, added Brown.

“It is hard to imagine what the department will be like without her presence,” Calabretta said.

What is Student Employee of the Year?

Who can participate in the Student Employee of the Year Recognition Program?

Supervisors from any WSU campus can nominate a student employee at any degree level. Students must be currently enrolled at WSU and have been employed for at least six months to be considered for the award. Student employees must be earning their paycheck from WSU, and outside organizations are not invited to participate.

How many student employees can an employer nominate?